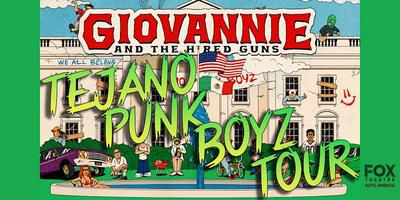 Giovannie and The Hired Guns LIVE at The FOX (Tejano Punk Boyz Tour) is happening on Friday, February 24, 2023 at 07:00PM CST at Fox Theatre - Hays, Kansas with tickets starting at $25.00

One of the most crowd-thrilling bands to burst onto the national scene in recent years, Giovannie & The Hired Guns have pushed the boundaries of rock-and-roll and country to forge an irresistibly gritty sound all their own.

The start of a 𝔹𝕆𝕃𝔻 new era for Giovannie and The Hired Guns—vocalist Giovannie Yanez, guitarists Carlos Villa and Jerrod Flusche, bassist Alex Trejo, and drummer Milton Toles—Tejano Punk Boyz expands on the wildly catchy brand of guitar-heavy alt-rock they first honed back when Yanez was working the counter at a local pawnshop.

In addition to delivering songs in both English and Spanish for the very first time, Tejano Punk Boyz doubles down on the culture-bending sensibilities that have long guided the band, fusing elements of everything from Red Dirt country to post-grunge to la musica norteña.

“We didn’t want to hold back at all with this album,” says Yanez. “We all come from different walks of life, and we wanted to mesh those influences together and come up with something that feels really free. Because of that, I feel like we created something that’s completely true to us, and like nothing else out there right now.”

Catch Giovannie & The Hired Guns at The Fox as part of their Tejano Punk Boyz Tour on Friday, February 24th!

Staying in Hays for a night or two? Book a room at one of these nearby hotels. 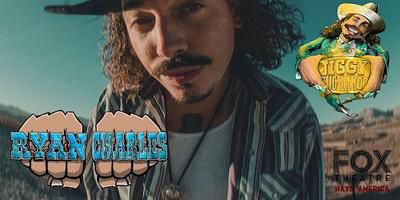