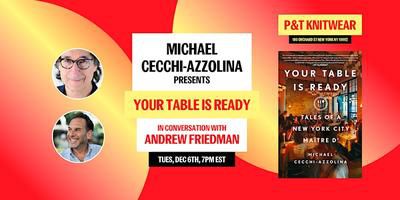 Michael Cecchi-Azzolina presents YOUR TABLE IS READY, with Andrew Friedman

Michael Cecchi-Azzolina presents YOUR TABLE IS READY, with Andrew Friedman is happening on Tuesday, December 06, 2022 at 07:00PM EST at P&T Knitwear Books & Podcasts and It's Free

P&T Knitwear is pleased to welcome Michael Cecchi-Azzolina to celebrate the release of his debut memoir, Your Table Is Ready (St. Martin's Press)! A " vivid, candid account of an admirable restaurant career" (Kirkus Reviews), Your Table Is Ready is a rollicking, raunchy, revelatory memoir — a front-of-the-house Kitchen Confidential from a career maître d’hotel who manned the front of the room in New York City's hottest and most in-demand restaurants. Michael will be joined in conversation by Andrew Friedman, author of the forthcoming book The Dish.

From the glamorous to the entitled, from royalty to the financially ruined, everyone who wanted to be seen—or just to gawk—at the hottest restaurants in New York City came to places Michael Cecchi-Azzolina helped run. His phone number was passed around among those who wanted to curry favor, during the decades when restaurants replaced clubs and theater as, well, theater in the most visible, vibrant city in the world.

Besides dropping us back into a vanished time, Your Table Is Ready takes us places we’d never be able to get into on our own: Raoul's in Soho with its louche club vibe; Buzzy O’Keefe’s casually elegant River Café (the only outer-borough establishment desirable enough to be included in this roster), from Keith McNally’s Minetta Tavern to Nolita’s Le Coucou, possibly the most beautiful room in New York City in 2018, with its French Country Auberge-meets-winery look and the most exquisite and enormous stands of flowers, changed every three days.

From his early career serving theater stars like Tennessee Williams and Dustin Hoffman at La Rousse right through to the last pre-pandemic-shutdown full houses at Le Coucou, Cecchi-Azzolina has seen it all. In Your Table Is Ready, he breaks down how restaurants really run (and don’t), and how the economics work for owners and overworked staff alike. The professionals who gravitate to the business are a special, tougher breed, practiced in dealing with the demanding patrons and with each other, in a very distinctive ecosystem that’s somewhere between a George Orwell “down and out in….” dungeon and a sleek showman’s smoke-and-mirrors palace.

PRE-ORDER YOUR SIGNED EDITION OF YOUR TABLE IS READY

"...funny, nostalgic, and fascinating, an insider's peek into New York City's most iconic restaurants... I always feel welcome the minute I see Michael wearing his warm smile, cool glasses and elegant suits and I always leave him laughing; Your Table is Ready will do the same for you."— Brooke Shields

PRE-ORDER YOUR SIGNED EDITION OF YOUR TABLE IS READY

Michael Cecchi-Azzolinahas been in the restaurant industry for more than thirty-five years. From his early career at La Rousse, he has gone on to run the front of house at New York’s most famous and influential restaurants, including The Water Club, The River Cafe, Raoul's, and Le Coucou. He lives in Manhattan.

Andrew Friedman is the author of Chefs, Drugs, and Rock & Roll: How Food Lovers, Free Spirits, Misfits, and Wanderers Created a New American Profession (Ecco/HarperCollins, 2018), and of the forthcoming book The Dish, to be published by Mariner Books/HarperCollins next year. He also hosts and produces the independent podcast Andrew Talks to Chefs, currently in its fifth year. As a book collaborator, he co-edited the popular anthology Don’t Try This at Home, and has partnered on more than 25 cookbooks, memoirs, and other projects with some of America’s finest and most well-known chefs, from legends like Alfred Portale to today’s tastemakers, such as Paul Liebrandt and Michael White, to an upcoming autobiographical book by Daniel Boulud, to be published by Grand Central Publishing. He is a proud resident of Brooklyn, NY. 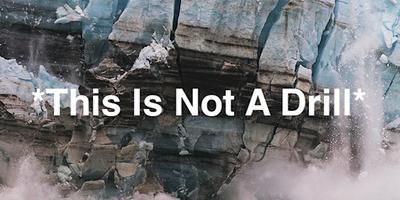 Closing Event for *This Is Not A Drill* Exhibition 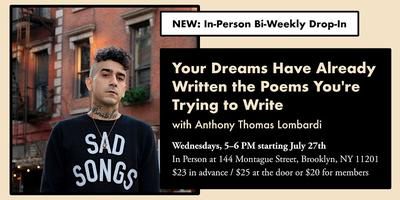 Your Dreams Have Already Written the Poems You're Trying to Write 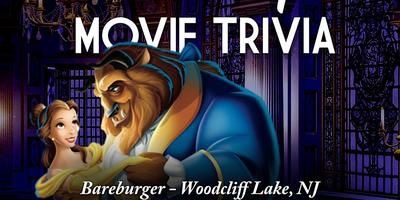 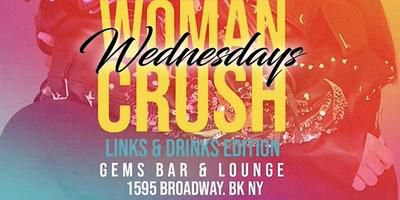 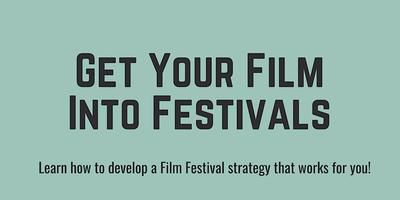 Get Your Film Into Festivals 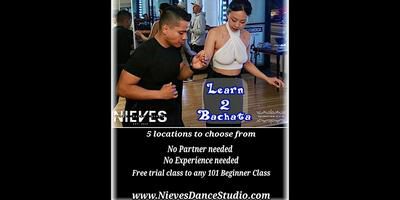 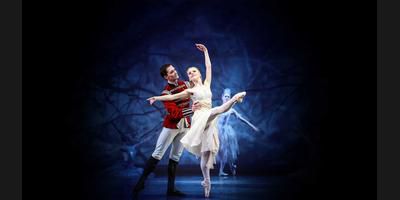 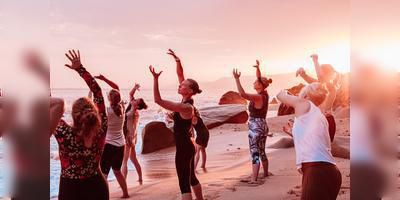